We are offering a 20% discount on all sheet music until January 2021.

Toward Slane for String Orchestra

Scroll down for sample score and audio

SKU: N/A Categories: Sheet Music, String Orchestra
This piece is a setting of the ancient Irish tune, “Slane”. The tune was adapted by the Protestant Church and is well known as the hymn, “Be Thou My Vision”. Unusual in this piece are two cello parts that supported at times by the viola and the 3rd violin part. This piece is intended for a mature middle school or high school orchestra. Your students might be interested in the history included here.

Slane is a small village that stands on a steep hillside on the banks of the River Boyne, in County Meath, in northeast Ireland. To the north of the village rises the Hill of Slane, which stands 518 ft. above the surrounding landscape. There is a legend that the tune “Slane” was composed in 433 AD, to honor St. Patrick and his defiance of the King!

On the eve of the pagan holiday known as Beltane, The King, Lioghaire (Leary) Mac Neill declared that no one should light the normal ceremonial fires while the single fire on the top of Tara Hill was burning. During this holiday, which is the forerunner of Easter, May Day, and near the timing of the Equinox, the custom was to extinguish all candles and fires in people’s homes, and to build two new fires outside which were used to relight the home fires. The farmers would drive their livestock between the two fires, as an act of purification and renewal. Going against the King’s wishes, St Patrick climbed the Hill of Slane and lit a fire to celebrate the resurrection of Christ. It is said that the king was so impressed with St. Patrick’s courage, that he let him continue his missionary work throughout Ireland.

The tune obviously has a very long history. Besides being called “Slane”, it was also known as “By the Banks of the Bann”, but It was 1oo years later that anyone took an interest in writing words to commemorate what had happened that day. A renown poet of his time, Dallan Forgail (530-598 AD), wrote a poem called “Rop tum o Baile”, which means “Be Thou My Vision”, the name of the hymn sung in the Christian Church today.

The Hill of Slane remained a center of religion and learning for many centuries after St. Patrick. At the sight now are the ruins of a church, a cemetery, and a college that are on the top of the hill. It was know as the “Slane Friary”. The gothic tower is 62 ft high and is now leaning drastically to one side. We do know that the Friary was restored in 112, but abandoned in 1723. The picture here I took on the isle of Inisheer of a signal tower and has no relationship to Slane. I just like the picture. 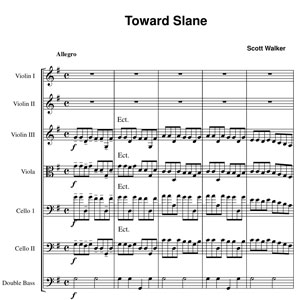 More About the Walker Family Band